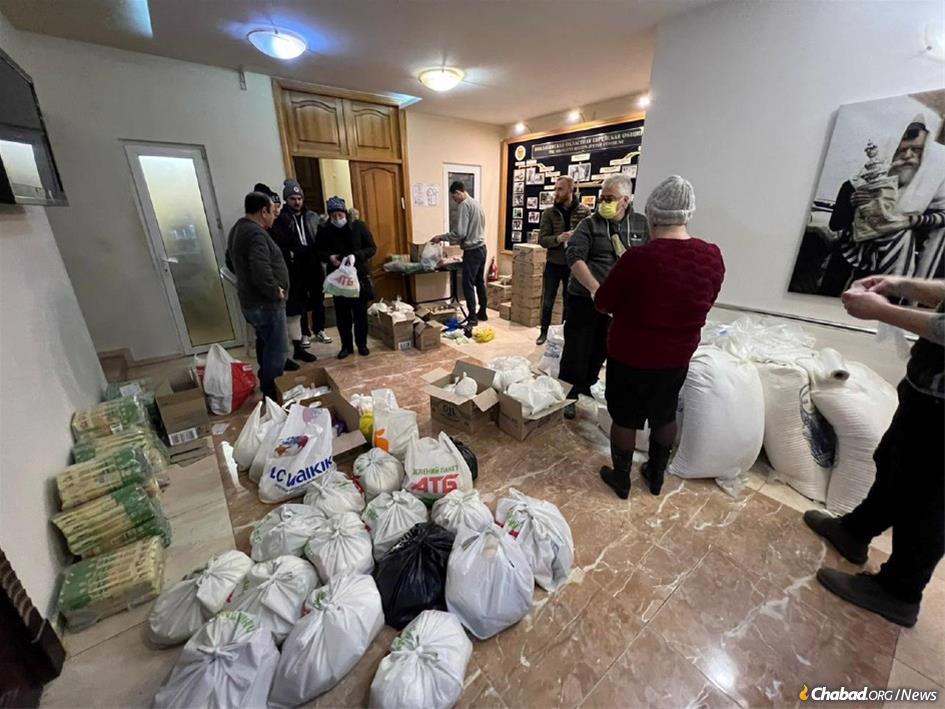 For weeks the eastern city of Dnipro—Ukraine’s fourth-largest city with almost a million people and an estimated 50,000 Jews—was a haven of relative calm amid the other cities. With its advanced Jewish infrastructure, including the 22-story high, 538,000-square-foot Menorah Center, it was only natural for Dnipro—led by the city’s chief rabbi, FJC representative, and Chabad-Lubavitch emissary Rabbi Shmuel Kaminezki— to turn into the center of refugee and aid activities for the Jews of eastern Ukraine, where the majority of the country’s 350,000 Jews live. In short order, Dnipro’s Jewish community was caring for its own while housing, feeding, and evacuating people running from harder-hit parts of the country.

This relative calm was shattered on March 11. While mass evacuations were already ongoing, with the Menorah Center serving as a hub for the those internally displaced, where they could freshen up, sleep and eat after a difficult journey while making onward plans—usually joining an FJC-organized convoy, bus, or train carriage—those efforts have now been stepped up, says Rabbi Yaakov Goldstein, a Dnipro emissary working on the evacuation effort.

“People are feeling a real danger,” Goldstein tells Chabad.org. “They are afraid. They have no choice but to become refugees.”

Goldstein says many of the internally displaced are from Kharkov (Kharkiv), but now, people in once-calm Dnipro are feeling unsafe. “It’s getting dangerous for Dnipro residents as well; we need to get everyone out, we take whoever asks.”

While running a mammoth operation to whisk hundreds out of the country each day, Dnipro’s Menorah Center is also at the heart of the relief efforts in other ways. For weeks leading up to the conflict, they stockpiled basic food staples that they are now sending to other Ukrainian cities, in addition to the large quantities of food the center is cooking each day and delivering to the needy in the community.

With the frigid weather outside, those with windows shattered are at risk, especially the elderly, many of whom are Holocaust survivors. The Jewish community and Chabad oof Dnipro is sending out crews to repair the windows and ensure the safety of the community’s most vulnerable.

Inside the center, a fully-equipped hospital is staffed by doctors, surgeons and nurses, providing life saving medical treatment at no cost to the refugees.

A Dangerous and Costly Process

Getting people out of active conflict zones can be a dangerous and expensive process, notes Goldstein.

FJC’s work doesn’t end at the border; staff help the refugees cross and work with Chabad emissaries on the ground. They’ve secured an entire hotel in Warsaw, Poland, and turned it into a refugee shelter. Israeli consular officials visit the hotel and work with those wishing to immigrate to Israel, with others are assisted in settling in places like Vienna, Amsterdam and throughout Germany, where Chabad is resettling thousands of refugees.

In Moldova, Ukrainian refugees are being received by the Jewish community and hosted on campsites. Goldstein says the situation in Moldova is especially difficult with a shortage of Israeli consular officials, and until recently, a shortage of beds. Thankfully, Chabad of Moldova has secured new campsites where they can continue to ensure that each person coming through is given proper sleeping quarters and three hot meals a day.

But as the refugee centers fill up and the crisis continues unabated, Goldstein prays for Divine intervention: “We’re hoping for a Purim miracle.”

As the crisis in the Ukrainian city of Nikolayev (Mykolayiv), on-the-ground sources report that the situation is getting worse by the day.

“There is no longer food on the shelves and no medicine in the pharmacies,” says Rabbi Shalom Gottlieb, the city’s rabbi and FJC representative since 1996 and director of Chabad-Lubavitch of Nikolayev, who is orchestrating relief efforts from Israel. “We have a large and devoted staff who are trying their best to help everyone in every way they can.”

First and foremost, they are purchasing large quantities of food and other staples, which they are giving to those in need. Thousands of food packages have been distributed, and the need continues to grow with each passing day.

When possible, distribution takes place at the city’s synagogue. But people are rarely venturing out for fear of shelling—on Sunday nine people were killed by rocket fire—so the staff have been delivering essentials of potatoes, rice, cabbage and onions directly to private homes and shelters.

Heat is no longer working in the city of nearly half-a-million residents. And with the weather expected to dip below freezing once again this week, the rabbi says they’ve been desperately delivering wooden debris, branches and crates to people’s homes, so that they will have some warmth.

At the same time, FJC and Chabad of Nikolayev has been dispatching busloads of refugees towards the Moldovan border and beyond. This task becomes more and more pressing as the fighting gets closer to Nikolayev and the prospect of attacks akin to what the cities of Kharkov, Kiev and Mariupol are experiencing looms.

The rabbi says that on Monday, aside from a full bus, they will be sending one ailing refugee to the border in an ambulance and have rented a private vehicle for a family with an autistic child who is unable to travel by bus.

Thus far, he has evacuated 550 members of the Jewish community from the city but estimates that many thousands remain. 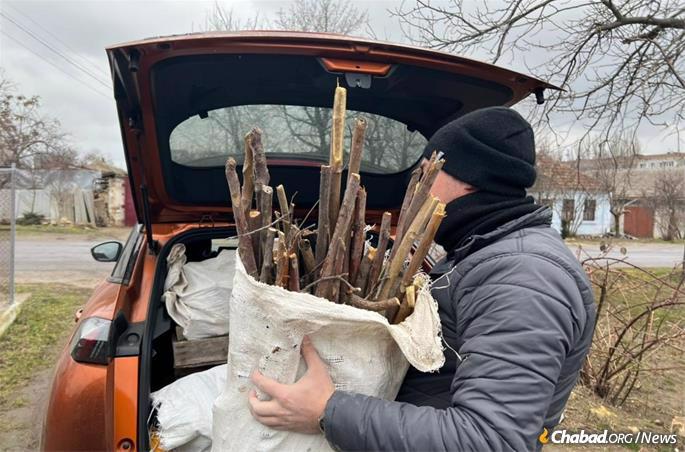 Some have not left because they or a loved one is elderly or infirm and not strong enough to make the trip; others don’t want to leave behind family members who cannot leave.

“We are supporting everyone in their situation,” says the rabbi. “If they can leave, we will leave no stone unturned to get them out. But if they are staying, we are there for them all the way, helping them to live in the city.”

The rabbi reports that the requests for help have been consistent since and have only become more frequent and more urgent as the crisis intensifies and people’s supplies run low.

Based on articles by  Menachem Posner & Faygie Levy Holt | Chabad.org