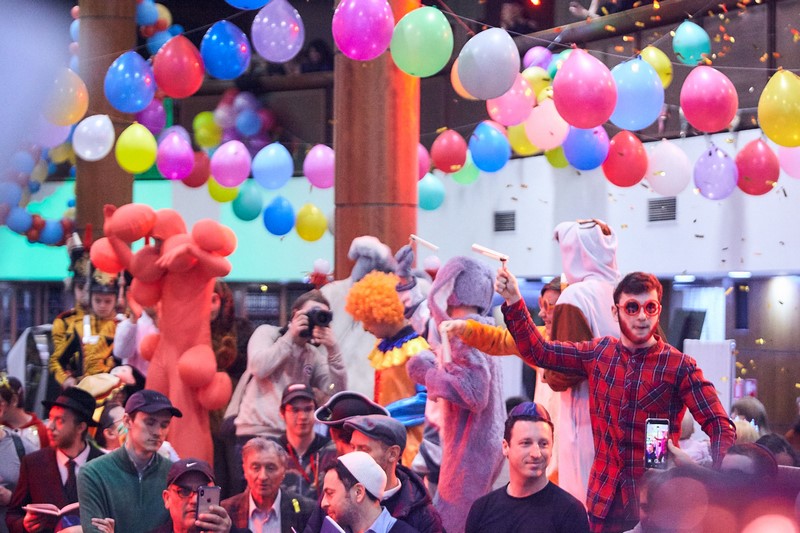 The Bar Mitzvah of philanthropist David Aminov’s son was a chance to feed 1,000 elderly Jews in Moscow on Purim.

It is with great satisfaction that we look back at Purim of this year, which was happily celebrated by thousands of Jews in Moscow.

After months of planning and preparing, with the help of additional volunteers and assistance from the community leaders, as well as coordinating with the many Jewish community centers throughout the city, everything was finally ready for the big day.

From the Marina Roscha Jewish Community Center, dozens of “footmen” were dispatched all day, to bring Purim joy and the ‘Mitzvot’ of the holiday to Jews throughout the capital.

The main festivities took place at the central Marina Roscha Synagogue under the auspices of Chief Rabbi of Russia Berel Lazar. As has already become the annual custom, megilla readings took place every hour on the hour, enabling families as well as businessmen to come and fulfill the mitzvah at their convenience.

The Shaarey Tzedek Chesed Center saw close to a thousand seniors who came to participate in the Purim feast which was sponsored this year by philanthropist David Aminov in honor of his son Natan’s Bar Mitzvah. The feast was followed by a special concert which included megilla reading and ‘Mishloach Manot’ food parcels.

This year the special emphasis was placed on house visits, which were coordinated by phone in advance. Hundreds of Jewish families were visited by our representatives who filled their homes with the light and joy of Purim and helped them fulfill the customs of the day.