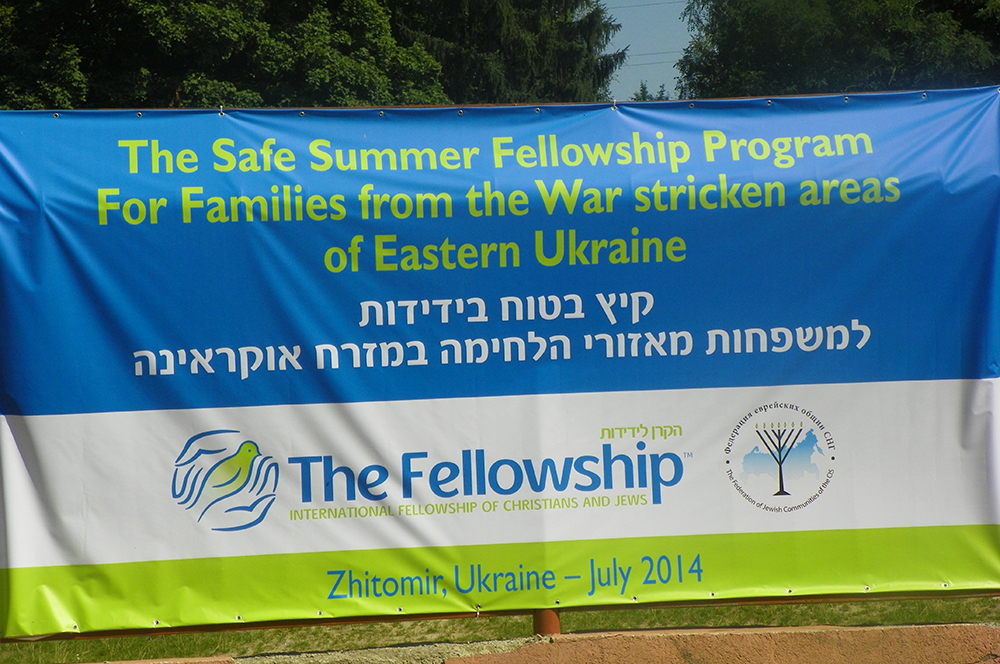 When Tatyana fled the beleaguered eastern Ukrainian city of Lugansk late last week, she felt relieved just to have made it out alive.

“It was a horror. We boarded the train under heavy bombing,” explains Tatyana, 50, who escaped together with her daughter, son-in-law and 7-year-old grandson. “It was relatively calm until July 13; there was some transport around the city, some stores were open. But then the real fighting began, and everyone ran to buy tickets to leave the city; we were lucky to purchase tickets for July 24. Anyone still there can no longer leave because the central train station was bombed, and trains cannot leave the city. People are dying in Lugansk, and it is getting worse each day.”

Tatyana, who declined to give her last name, and her family, are among the more than 250 Jewish refugees from Lugansk and surrounding towns slowly recuperating at the first Jewish refugee camp established by the FJC in Ukraine. The site was secured on campgrounds owned by the Jewish community of Zhitomer and is being organized by Rabbi Sholom Gopin, chief rabbi of Lugansk.

Since early July, when Ukrainian armed forces began closing in on the pro-Russian separatists who control Lugansk, the border city has been transformed into a virtual war zone. With artillery explosions and gruesome death quickly becoming a daily part of life, thousands of Lugansk’s citizens have fled, and together with them, an estimated 1,000 members of the Jewish community.

“This is the biggest Jewish refugee crisis in Ukraine since World War II,” exclaims Gopin, speaking to Chabad.org from Zhitomer, where he is directing the camp as he attempts to help community members resettle, at least temporarily. Like so many of their neighbors in embattled eastern Ukraine, “the Jews of our community left everything behind,” he says. “They have no homes, no jobs, no money. Many still have family stuck in Lugansk. This week, five elderly people were killed in an explosion at an old-age home adjacent to our Simcha Jewish Orphanage, where close to 40 Jews are now staying.”

Jewish community members Svetlana Sitnikov, 57, and her daughter Anna Sitnikov, 31, were killed last week in an explosion while on a quick shopping run. Anna’s 4-year-old son, Vadim, stayed behind with his grandfather and survived. The two arrived at the Zhitomer camp site just days after the family tragedy.

Open Space After Weeks of Huddling for Safety

Prior to leaving the city, Tatyana’s daughter and family spent days in their bathroom, which they deemed as the safest place in their small apartment to wait out the military operations outside. At her own multi-storied apartment building, Tatyana huddled with neighbors near the elevator shaft on her floor.

After boarding a train out of the city, the family’s first stop was Dnepropetrovsk, where they were taken in by that city’s Jewish community. Coordinated by Gopin, other Jewish Lugansk refugees have gone to Kharkov, Kiev and Odessa as well.

“If not for the Jewish community, we wouldn’t have known how to leave at all,” says Tatyana. “We are here for free now—the community even paid for our train tickets out of Lugansk. Now we are here, safely, but we do not know where we will go from here.”

While the fighting and subsequent life as a refugee has taken a heavy toll on all ages, its effects can be seen most visibly in children, whose lives have been completely upended by the turmoil. A peaceful night’s sleep has become but a memory for Lugansk’s citizens, young and old, as pre-dawn artillery fire and missiles rain down on the city. Allowing a child to play in the courtyard—or even just grab a breath of fresh air—has become too dangerous.

Tatyana says her grandson is still scared. At night he screams, petrified by his recent memories, she says. He has been slowly joining other children playing games and sports, surrounded by the green grass and white birches of what is normally the Jewish community of Zhitomer’s summer camp, and taking part in programs aimed at allowing them to act like regular children once again.

“Thank G‑d, he has been able to calm down a little bit here,” says Tatyana, a teacher by profession. “The children are painting with bright colors. My grandson loves to fish, so he goes fishing here every morning with his father.”

Teen Happy to Be Safe, but Worried About Parents

Daniel Sklyrov, 16, is another Lugansk native enjoying the refuge of the camp. He left Lugansk on July 22 with his grandmother and 4-year-old sister, Sonya, and is happy to have found safety.

“I can relax here,” says Daniel. “It is very good not to be worried about the bombs. We lived under that, and it’s not a joke. You can’t live a normal life there. A mortar landed on a store, and a piece hit the girl behind the counter; the doctors amputated her leg. A teacher from my school was killed. That is normal life in Lugansk.”

For Daniel and his sister, however, the fight in Lugansk cannot fade into the background because their parents remain there, unable to leave.

“Every phone call I get from my parents is so valuable to me. It brings up the thought that it may be the last call that I get from them,” he says.

Daniel relates that while they were in Lugansk, Sonya cried every night, as explosions shook the city. Now, with food to eat and a quiet bed she can call her own, she has been able to calm down.

“She feels safe here, so that is good,” says Daniel. “But she remembers our mother each night, and even though we do not really know when this will end and when we will see our parents again, my grandmother and I tell her each night that soon, this will all end.”

As for future plans, with Gopin’s help the Sklyrovs hope to stay in Zhitomer in the fall once camp ends, where Daniel and Sonya will likely attend Chabad of Zhitomer’s school.

“On the first day of school,” says Daniel, “when the teacher asks me to write an assignment on what I did over the summer, I will title my paper: ‘How War Stole My Summer.’ ”

Struggling to Pay Their Bills

Since the crisis in Ukraine started at the beginning of the year, the country’s economy has collapsed, placing Jewish communities across the country in deep financial despair. Having lost many local donors and faced with mounting expenses, communities are struggling to pay their bills each month. The Lugansk Jewish community has fared no better, yet now, beyond just its regular budget, Gopin has taken upon himself the additional burden of providing all he can for Lugansk’s Jewish refugees.

“The camp here has been fully sponsored by Rabbi Yechiel Eckstein of the International Fellowship of Christians and Jews,” states Gopin, stressing that the camp could not have happened without their generosity. “We’ve also received some help from Ohr Avner,” he said. “But I really don’t know what will be on the first day that camp ends. Many people came to camp expecting to go back to Lugansk, but they can’t anymore. We are working to make sure that everyone has a place to go, but we are very seriously lacking the funds right now.”

With all the talk of refugees from Lugansk, the rabbi forgets to mention that he and his family are themselves practically homeless. “It is true. We left home with only five suitcases. My house and car, everything, it is all in Lugansk. I don’t know when we will be able to return.”

Tatyana says that beyond the financial help, food and shelter that have been provided to her and other Jewish Lugansk natives, it is the sense of a community caring for its own that has provided much-needed strength for many.

“Our rabbi is helping us all,” she says. “My family is safe because of his organization. He is really, truly worried for us.”

But like others in Ukraine, that admiration does not extend to the rest of the world. “We don’t even know who is bombing anymore and who is shooting anymore. No one speaks of what is happening here; it’s as if we’ve been completely forgotten.”

Gopin can’t help but agree with such an assessment, saying: “We are struggling to survive.”

A general fund on behalf of the Jewish communities in Ukraine can be found here.