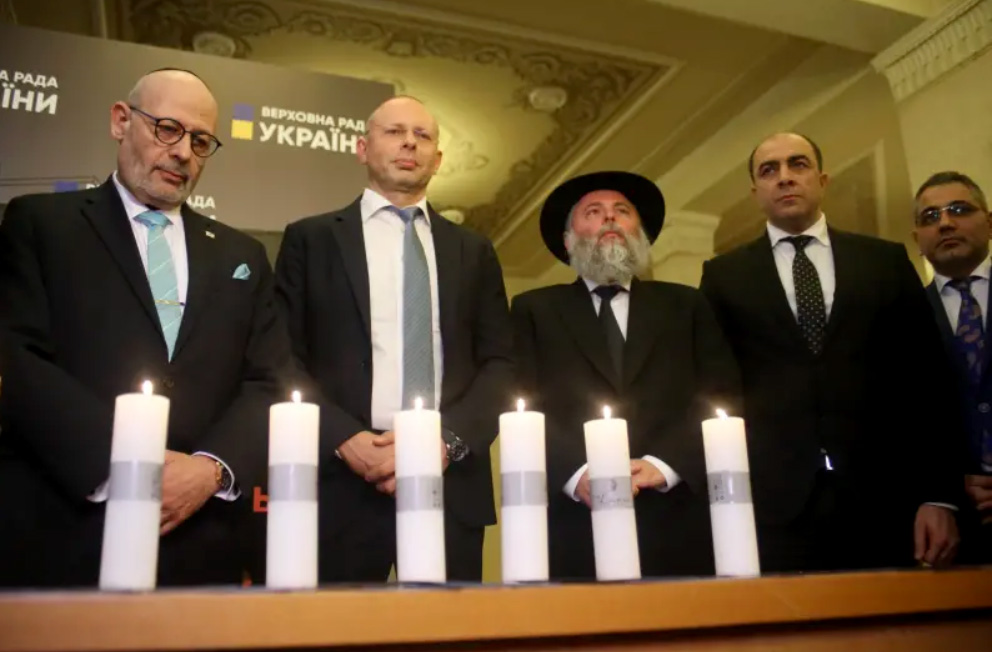 “I am proud to stand here today and to affirm that I, Jonathan, carry on the name of my great-grandfather who was burned in this land just because he was a Jew!” Rabbi Markovich said in his address.

For the first time in its history, the Ukrainian parliament, referred to as “Verkhovna Rada,” marked both International Holocaust Remembrance Day and the 75th anniversary of the liberation of Auschwitz on Thursday.

The event was held following a minor spat between Jerusalem and Kiev concerning marches that were held throughout Ukraine in the beginning of January marking the 111th birthday of former leader of the Organization of Ukrainian Nationalists (OUN) and Nazi collaborator, Stepan Bandera.

In light of the OUN’s complicity in the murder of thousands of Ukrainian Jews by Nazi Germany, both the Israeli and Polish Foreign Ministries released statements criticizing the “glorification of anti-Semites and murderers of Jews.”

The joint rebuke was an unusual move for Poland and Israel, two countries with deep cultural and economic ties to Ukraine.
Bandera was also involved with violence against ethnic Poles in Volhynia and Eastern Galicia, while exact numbers are unknown, it is estimated that the OUN was responsible for the murder of roughly 100,000 Poles.

During his address, Rabbi Markovich spoke of his grandfather, who he is named after. He told the attendees his namesake was murdered by the Nazis and their collaborators during the Holocaust’, saying “I would like to tell you all about the Austreicher family that lived in Ukraine during the second World War.”
He continued, saying that “the family’s father was Rabbi Jonathan Benjamin and his wife was Feiga Esther. The murderers brought the family into a room, along with their three granddaughters, and burned them. I am proud to stand here today and to affirm that I, Jonathan, carry on the name of my great-grandfather who was burned in this land just because he was a Jew!”

Rabbi Markovich finished by reciting a memorial prayer for all the souls of the Jews who were murdered during the Holocaust.

Israeli Ambassador to Ukraine, Joel Leon, referenced the extent of Nazi Germany’s Holocaust of Ukrainian Jewry. “Of the six million Jews murdered in the Holocaust, 1.5 million of them including men, women, children and babies, were murdered here, in the territory of Ukraine.”

Leon added that members of his own family, including his great-grandfather, Menachem Mendel were also murdered there. The Ambassador said the Jewish people’s response to such atrocities is demonstrated by him “standing here today, wearing a pin with a blue, not a yellow, Star of David and representing the state of Israel.”

Leon also took the opportunity to call upon the Ukrainian government to adopt the International Holocaust Remembrance Alliance’s definition of antisemitism, which includes both “rhetorical and physical manifestations of antisemitism.” While acknowledging that the number of antisemitic acts perpetrated in Ukraine is in decline, Leon stressed that the same cannot be said about overall antisemitic sentiment and rhetoric in the country.
In May of 2019, the Ukrainian government formally applied for membership into the IHRA and is likely to adopt the IHRA definition of antisemitism soon, especially when taking into account that the current President of Ukraine, Volodymyr Zelensky, is Jewish.

He elaborated, telling attendees that “during World War II, my family lived in occupied Kiev. Several families lived in the building. One day, their Jewish neighbors were taken by the Nazis. They left my grandmother’s family alone because they were not Jewish, but they took their neighbors just because they were Jewish. They were generous and decent people, but they never came back. They remained in Babi Yar” (a ravine in Kiev where Nazis murdered tens of thousands of Jews).