Hundreds in Estonia to Join in Public Rosh Hashanah Tradition

In years past, the Jewish community of Tallinn, Estonia, kept a low profile, the long-term result of half-a-century of Soviet oppression and Nazi persecution. Yet come Rosh Hashanah, hundreds of Jewish people will parade through the center of this nation’s capital city again this year, singing Jewish songs, many wearingkipahs on their heads.

Like Jews of all ages around the world, they will be participating in an ancient ritual known as Tashlich, which involves going outdoors to a natural pool of water on the first day of Rosh Hashanah following the afternoon prayer service and saying Psalms and other prayers there.

“It’s one of the high points of our year,” says 28-year-old Eliyahu Shmorgun. “I go with my family and with my friends from the community, who have become a second family for me, and we so enjoy being with each other and openly displaying our Jewish identity.”

Rabbi Shmuel Kot, the country’s chief rabbi and Chabad-Lubavitch representative, says when he first came to Estonia in 2001, “very few people were willing to come with me for Tashlich. They were afraid to be seen in the open with a rabbi with a beard and black hat. Some who did come would lag a few paces behind or otherwise try to remain inconspicuous.”

Undeterred, the rabbi, his wife Chanie and their growing family made their annual trip to Talinn’s port with anyone brave enough to come along. After a few years, the group grew to a dozen. By now, the annual tradition attracts some 200 people, an estimated 10 percent of the local Jewish population.

The procession is preceded by a festive Rosh Hashanah meal at the community’s modern glass-and-steel synagogue and community center.

“Not everyone in our community is yet at the stage where they take off work on Rosh Hashanah morning, so an afternoon meal allows more people to participate,” notes Kot.

Shmorgun adds that “the rabbi just came 15 years ago, so our community is relatively young. Like most others here, I just began learning about Judaism as a young adult. We are a small community, but we are very close-knit and support each other as we grow in our Judaism.”

After everyone has eaten their fill of round challah, honey, sweet chicken and other holiday delicacies, they set out for the city’s harbor—one of the busiest passenger ports of the Baltic Sea. Normally a 10-minute walk, the participants stop frequently as the rabbi blows shofar for the families and individuals who continuously join the boisterous crowd.

As they stride forward, they sing and clap to familiar Hebrew songs, as well as to “Napoleon’s March,” a Chabad melody sung at the conclusion of Yom Kippur and during communal marches on festivals.

(In fact, in 1941, just months after theRebbe—Rabbi Menachem M. Schneerson, of righteous memory—had escaped Nazi-occupied France, he arranged that the Chassidim sing a joyous song and march two-by-two down Eastern Parkway in Brooklyn, N.Y., to perform Tashlich at a pond in a nearby park.)

Upon arrival, against the backdrop of the shimmering Baltic, the rabbi shares a few words with the jubilant crowd, blows the shofar yet again for those who missed the previous blowings and leads the assembled in the short Tashlich prayer.

Often, they then break out into spontaneous dancing at the pier, something that would have been unimaginable just decades beforehand.

The rabbi notes that the younger generation—raised in the post-Soviet Republic of Estonia—seems comfortable in their identity as Jewish people in a country with an ethnically Estonian majority and a very significant Russian minority. Mostly Russian speakers, the Jews of Estonia are a minority within a minority.

“I feel that in Estonia today, most people have never encountered a Jew, and are vaguely curious when they see a Jewish person wearing a kipah and tzitzit,” says Shmorgun. “But our rabbi has appeared regularly at the president’s Independence Day celebration looking like a Chabad rabbi should, and there is a growing core of Jewish people who identify publically as Jews all the time.

“Judaism is becoming more and more accepted as a part of our society. It’s moments like this that keep us going.” 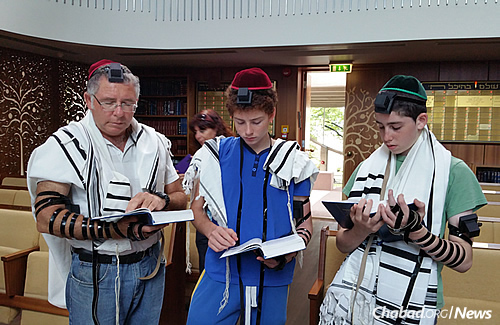 Wrapping tefillin in synagogue. The Jewish community in Estonia is getting ready for what has become a growing tradition there—participating in Tashlich, where in this case, Jews will symbolically cast their sins into the Baltic Sea.
PrevOn the Frontline in Ukraine
100 Year Celebration of Kazan’s Historic SynagogueNext

30 Tons of Winter Clothing for Ukraine Collected in London

History in Kaliningrad: The New Synagogue Museum Opens its Doors

From Kherson to Hanover, How Two Sisters Shaped a Family’s Life