Passover has always symbolized the Jewish longing for freedom and redemption, presenting a story of hope to a people who have long yearned for it. Struggling amid turmoil, economic crisis and war, hundreds of thousands of needy Jews spread throughout the former Soviet Union will once again experience the hope and freedom of Passover. Already underway, a massive humanitarian aid project is being conducted by the Chabad-Lubavitch affiliated Federation of Jewish Communities of the CIS (FJC), with the steadfast support of the International Fellowship of Christians and Jews.

From large cities in Russia to remote villages in Azerbaijan to vast swaths of territory now under military siege in Ukraine, groups are distributing 100 tons of Passover matzah, along with thousands of kosher food packages stocked with basic necessities to help families continue to subsist.

While life in some of the former Soviet republics has been difficult for decades, circumstances have worsened dramatically across multiple borders since the flare-up of war in eastern Ukraine a year ago. Wealthy Jewish community members have been forced to scramble to protect their assets; the middle class has been rocked due to a severe credit crisis; and the poor have only gotten poorer.

Economic hardships have continued to affect Jews throughout the former Soviet Union, but those who have remained in the cities and communities of eastern Ukraine have been hit the hardest. Cut off from government pensions and assistance for more than 18 months—government aid was stopped not long after certain areas formally announced their independence from Ukraine—many are scrounging for some food to eat.

With an official border now in place between mainland Ukraine and the separatist areas, transporting boxes of matzah and food supplies for the needy in Donetsk and Lugansk region has not been easy.

“It was a very difficult task,” says Donetsk’s chief rabbi and head Chabad emissary, RabbiPinchas Vishedski. “The matzah isn’t just food for Passover; it also means a whole world to the Jews of Ukraine. It gives them hope for a better future, reminds them of their Jewish roots, and enhances their Jewish pride and commitment.”

In addition to those who have continued living in the war-torn lands of the east, thousands of Jews have been scattered throughout Russia and Ukraine, as they flee the chaos that has enveloped their home towns, leaving everything behind. These refugees, who can be found in cities from Rostov-on-Don, Russia, to Odessa, Ukraine, have been given special assistance from the fellowship, which, in addition to the emergency Passover fund, has granted them extensive help with rent, financial aid, food and clothing.

“In Odessa, we have one of the largest Jewish populations in Ukraine,” says Rabbi Avraham Wolff, head Chabad emissary and chief rabbi of Odessa. “The community was always large and has many families in need, but now with thousands of additional refugees, we could not have managed alone. We are now able to provide everybody with assistance, and we make sure nobody needs to wait in line or feel any shame or disgrace.” 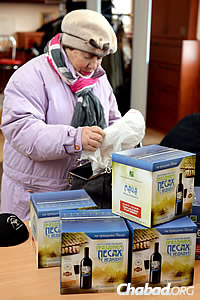 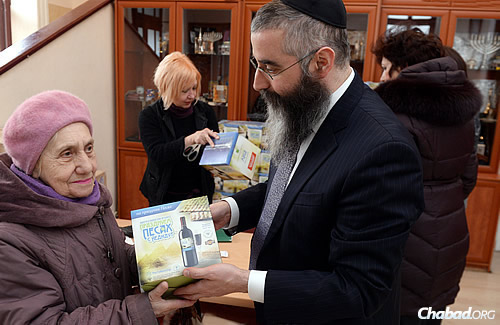 The combination of war, refugees and financial collapse—in both Ukraine and Russia—has made this year one of the most difficult in recent memory for the Jews of the former Soviet Union. With hundreds of affiliated Jewish communities, the FJC has utilized its vast network to ensure, with vital assistance from the International Fellowship of Christians and Jews, that no Jewish family in the former Soviet Union remain without matzah or the basics to celebrate Passover.

“On behalf of all the Jewish communities across the former Soviet Union, I wish to personally thank Rabbi Yechiel Eckstein,” states the president of FJC, philanthropist Lev Leviev. “Under his leadership, the fellowship has an open heart to the needs of every single Jew in these lands throughout the entire year. His great deeds of kindness save lives, and have a deep and everlasting influence on the continuity of Russian Jewry.” 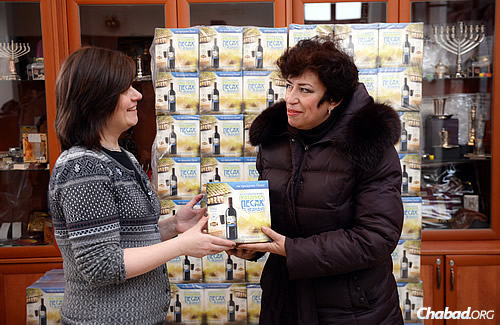 The rabbi’s wife, Chaya Wolff, also distributes Passover items to those who need it in Odessa. (FJC Photo) 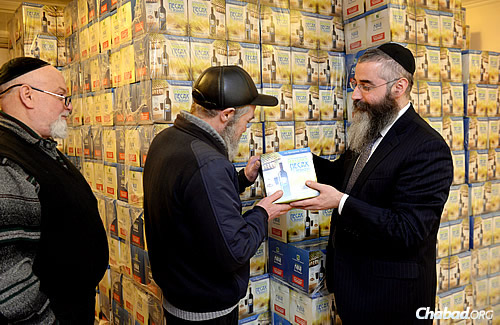 While life in the former Soviet republics has been difficult for decades, circumstances have worsened dramatically across multiple borders since the flare-up of war in eastern Ukraine a year ago. (FJC Photo) 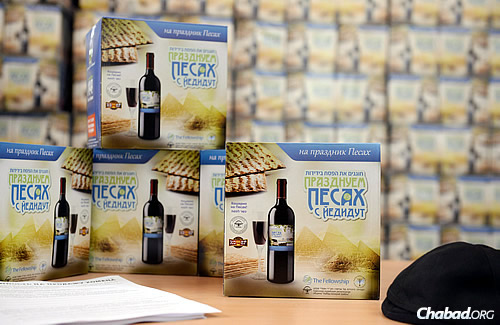 With an official border now in place between mainland Ukraine and the separatist areas, transporting boxes of matzah and food supplies to residents of Donetsk and Lugansk in the east has not been easy. But as Donetsk’s chief rabbi and head Chabad emissary, Rabbi Pinchas Vishedski, says: “The matzah isn’t just food for Passover; it means a whole world to the Jews of Ukraine. It gives them hope for a better future.” (FJC Photo)
>> Press here to learn more and donate <<
PrevFJC Presents: The Story of Passover
Just in time for Passover; New clothing for the needyNext