A trained scribe unfurls the tiny parchment and peers at its intricate black letters. He dabs his quill into ink to make a small correction. This scribe—or sofer in Hebrew—is not sitting in Jerusalem or Brooklyn; he’s at the offices of the newly opened Lishkas Stam in Moscow. The sofer and the center’s presence are a testament to just how much Russia’s Jewish community has grown—not just in breadth, but in depth.

The center, which sits not far from the Chabad’s central Moscow Jewish Community Center in the city’s Marina Roscha neighborhood, was inaugurated this week by Russia’s Chief Rabbi Berel Lazar, who affixed a mezuzah to the center’s front entrance.

The art of writing and checking Torah scrolls, tefillin and mezuzahs is a painstaking and unforgiving one, requiring years of practice and knowledge. It is a highly specialized field, one that can sometimes even run through a family, passed down from father to son. Like a ritual slaughterer, a scribe must be known to be a G‑d-fearing individual as well. After all, they are entrusted with creating Judaism’s holiest objects—items that serve not as mere decorations, but are used and relied upon for daily ritual.

In Moscow, Lishkas Stam will be selling high-quality tefillin and mezuzahs, as well as checking and fixing them, serving the general Jewish community and the Chabad-Lubavitch emissaries who lead Jewish communities around the vast country. Officially opened this week, the office began working slowly four months ago; in that time, they have checked more than 100 pairs of tefillin and 300 mezuzahs.

Operating under the supervision of the chief rabbinate of Russia, Lishkas Stam is directed by Rabbi Schneur Zalman Deren and its team of scribes: Rabbi Yitzchak Zilber and Rabbi Eliyahu Dickstein, led by Rabbi Leib Artovsky.

Rabbi Yitzchak Zilber, 31, didn’t always dream of becoming a sofer. The Russian native was born and bred in the frozen northern city of Syktyvkar, Komi Republic—1,300 kilometers north-east of Moscow. Growing up, his family was somewhat traditional, and at age 21 he made an online search looking for the proper way to make Kiddush on Shabbat.

“I ended up on the site of a summer yeshivah in Petersburg,” says Zilber. “I attended that summer and came back home to Syktyvkar for a few weeks before going back to yeshivah for good.”

He studied at the yeshivah in Moscow before going to Israel, where he began studying safrut—the art of being a scribe. Now married and living in Moscow, Zilber says they’ve seen much interest in the wider Jewish community for their services.

“I would say that about 60 percent of the people we’re seeing are only loosely involved with the community,” he says

Whereas for years religious items such as these, which can cost a great deal, were often distributed within the community for free or at least at a great discount, many want them nowadays of their own volition. And they want to choose items for themselves.

Says the rabbi: “There are people coming in who want to purchase a mezuzahfor their home because they themselves feel it’s important.” 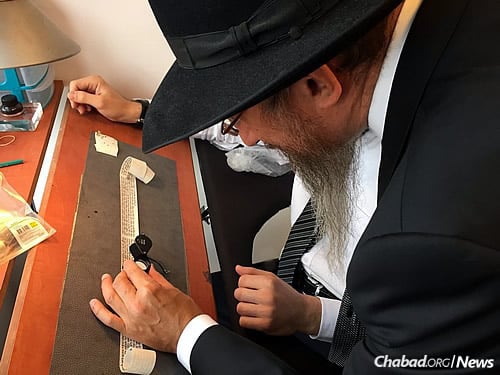 Getting a closer look at the writing. 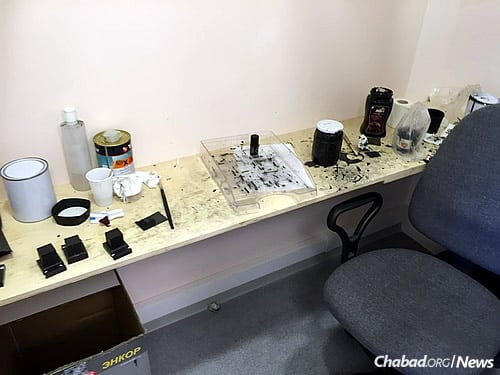