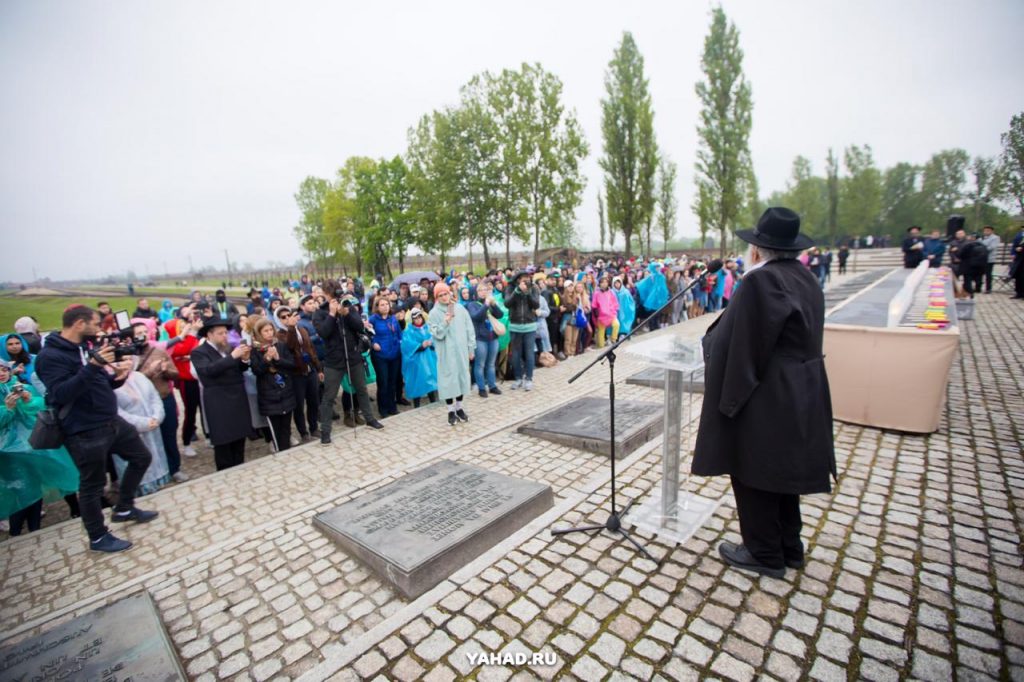 “Am Yisrael Chai!” 800 Jewish students called out after being inspired by Poway’s Rabbi Yisroel Goldstein’s message of Jewish pride and triumph against adversity at the Auschwitz concentration camp.

Just weeks after the anti-Semitic attack at Chabad of Poway in Southern California, Rabbi Yisroel Goldstein visited the Auschwitz concentration camp in Poland, with a message of Jewish pride.

Rabbi Goldstein, himself injured in the shooting attack with injuries to both his hands and the loss of a finger, joined a group of 800 Jewish youth from former Soviet Union countries on their annual “Eurostars” trip to sites of Jewish interest and history across Europe.

Organized by the Yahad special programs headed by Rabbi Mendy Wilansky, under the Federation of Jewish Communities of the CIS, Eurostars rewards young Jews who have made a significant commitment to Jewish study with a trip to several European countries, where they visit local tourist destinations and places of import.

Following a trip to Rome, the group spent a special Shabbat together where many of the students made resolutions to increase in their Judaism.

On Sunday, they visited Auschwitz, where more than a million Jews were murdered by the Nazis during the Holocaust in World War II.

After an inspiring Shabbat together, Rabbi Goldstein addressed the students at the Birkenau death camp and gave a message of hope for the future, and triumph against adversity.

“Where we are standing is the darkest place in the world, but today, it is the brightest, because 800 future leaders are standing here,” Goldstein said.

Rabbi Goldstein implored the students who had made a resolution over the weekend should follow through with it, and told them that he is empowering them, with what he had lost.

“I told the students that I am figuratively giving them my finger that was taken away from me by the terrorist, to point to another Jew in their own respective cities, and bring them closer to G-d,” Rabbi Goldstein told COLlive.

In response, “the 800 students shouted ‘Am Yisroel cChai!’ The same words I said 14 days earlier in the aftermath of the attack,” Rabbi Goldstein said.