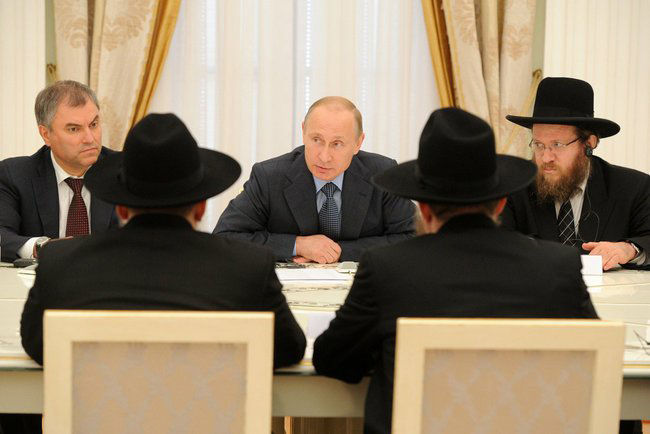 Russian President Vladimir Putin on Wednesday met with Russia Chief Rabbi Berel Lazar and the President of Jewish Communities of Russia, to discuss joint efforts to combat anti-Semitism and neo-Nazism.

The meeting was also attended by rabbis from Israel, Austria, Belgium, Germany, Italy, the Netherlands and France. During the meeting, the parties discussed joint efforts to prevent the ‘rewriting of history’: the fight against neo-Nazism and neo-fascism, as well as xenophobia and anti-Semitism.

Putin assured the Jewish leaders that Russia will fight against any new manifestations of Nazism. “Of particular concern is the revival of Nazi ideas,” said Putin. “I want to thank the Jewish community, non-governmental organizations that are both active and courageous; we see it in today’s world – how a struggle is being uncompromisingly waged against all manifestations of the Nazi ideology and any attempts to revive it.”

“We consider you, in this regard, our closest allies and ask you to consider us and as such,” the Russian President added.

During the meeting, Putin noted that the meeting took place on the eve of the anniversary of the tragic events of July 1942, when thousands of Jews were murdered in Sevastopol. “In Russia we will not only never forget these tragedies; furthermore, we will always cherish the memory of the dead, and we will do everything we can to prevent a recurrence of similar tragedies in the future,” he said.

Rabbi Lazar, on his part, thanked Putin for the Russian government’s focus on religious and national issues, stressing that “the organization of this meeting is the best proof of such attention.”

“It is in Russia that people are genuinely concerned about the threat of neo-Nazism, Holocaust denial and revisionist approaches to World War II,” Rabbi Lazar said. “Many leaders in different countries prefer to keep quiet about it, but here in Russia the matter is openly addressed. Tomorrow we fly to Sevastopol, where we will once again remember the 6 million [Jews] that died.”

“For us, it is very gratifying to see how it is in Russia, a country where the Jewish way of life was previously banned, that such a dynamic Jewish community exists now. We are grateful to the government for its support and for the fight against anti-Semitism,” he added.

The problems of growing anti-Semitism in Europe and throughout the world were addressed by the foreign guests — Rabbi Yitzhak Yosef, Rabbi Jacobs, Rabbi Lieberman and Rabbi Yisrael Meir Lau. The latter also thanked the Russian authorities for the fight against anti-Semitism and told his personal story of how a Russian soldier, Fedor Mikhailichenko, saved his life in Buchenwald.