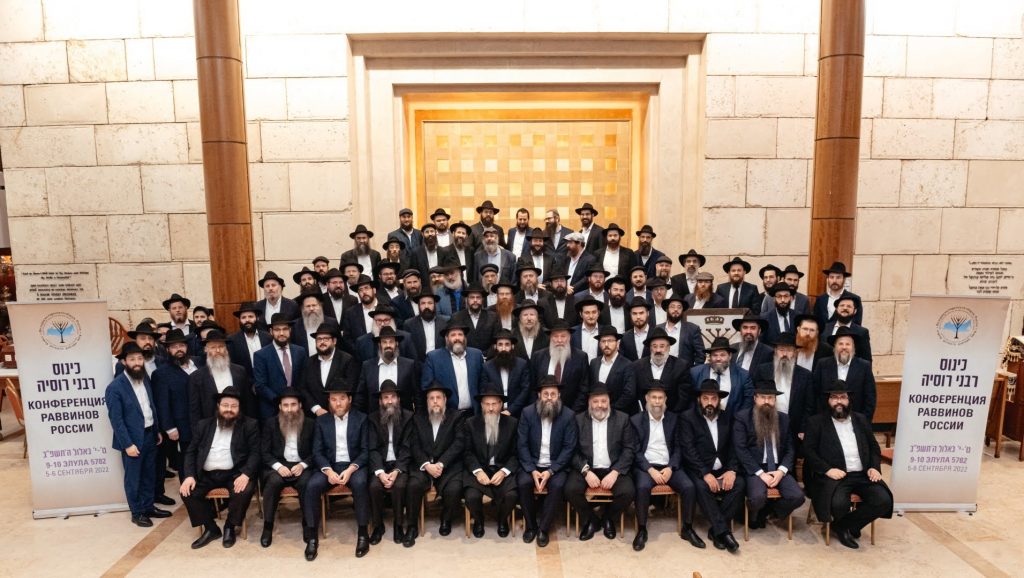 An emergency gathering of the rabbis of Russia took place in Moscow on Monday afternoon. The conference of the Federation of Jewish Communities of Russia was attended by more than 75 rabbis representing the largest Jewish communities in the country and focused on the extraordinary situation the Jewish community of Russia finds itself in and the vital leadership role played by rabbis and Jewish communal leaders.

Relations between Russia and the rest of the world have rapidly deteriorated since the crisis began in February, resulting in economic uncertainty and, of significant concern to the Jewish community in particular, a sense of fear and isolation not felt in decades. The rabbis of Russia have been working to guide their communities through this unprecedented crisis, and at the conference issued a joint resolution reiterating their commitment to their communities.

“We … continue on the path we have long taken … ,” the resolution reads, “deepening the sense of Jewish identity within the Jewish community, studying and teaching Torah and Jewish tradition. We are obligated to imbue our communities with Jewish tradition, to strengthen educational and communal institutions, and to aid all those in need of support.”

The rabbis also issued a joint call for peace and the cessation of bloodshed, something the leading rabbis at the conference have done consistently since late February.

“We pray that no more blood be spilled, and call upon people of good conscience everywhere to help aid those in need, including refugees, and end the suffering,” the rabbis of Russia proclaimed. “We pray together that very soon the prophecy of Isaiah will be fulfilled, that, ‘nation shall not lift the sword against nation, neither shall they learn war anymore.’”

The conference was addressed by Rabbi Berel Lazar, the chief rabbi of Russia; Alexander Ben Zvi, Israel’s ambassador to Russia. Ben Zvi read a letter of support for the rabbis of Russia and its Jewish community from Israel’s President Isaac Herzog.

“Each of you, the devoted rabbis and spiritual leaders of the Jewish communities which you are serving, has demonstrated remarkable strength standing strong and proud and never turning away from the people you serve: our Jewish sisters and brothers,” Herzog wrote.

Herzog noted that the rabbis had set out to revive and build Jewish communities, never dreaming geopolitical circumstances would alter so drastically, and yet they remain steadfastly committed to their work. “[Y]ou continue … even now, amidst the terrible tragedy that has befallen the community of Ukraine, and the all-consuming fear and uncertainty in Russia. Like a ship captain, you know your community looks to you for courage, faith and leadership. You have answered that call heroically… . Many of you are [representatives] of the Rebbe, Rabbi Menachem M. Schneerson, of blessed memory, working to maintain Jewish life all across the globe. Your commitment in such times of fear, to your Ukrainian and Russian communities, is especially brave and awe-inspiring.”

The gathering was held at the Moscow Jewish Community Center in the Marina Roscha neighborhood of Moscow. The seven-floor center stands on the location previously occupied by the small wooden Marina Roscha synagogue, which from its construction in 1927 and through years of Soviet oppression and persecution served as a base for underground Jewish activities led by Chabad-Lubavitch activists. The original structure was destroyed by arson in the mid-1990s following which the current synagogue and center was built.

Opening the conference, Rabbi Lazar stated that the rabbis of Russia had two critical tasks at hand, to assure the Jewish community that they are there for them, and to once again stress the immediate need for peace.

“Always being with their communities is the main task of religious leaders,” Rabbi Lazar said. A life in business or the like offers flexibility, he explained. If a business fails in one market, the business owner can move to another. Not so a rabbi. “A rabbi should always be with his Jews, even in the most difficult times.”

Messages of support for the Russian rabbis were also sent from both chief rabbis of Israel, Rabbi Yitzchak Yosef and Rabbi David Lau; human rights activist and former Soviet dissident Natan Sharansky; and 20 leading rabbis from across Europe.

In his letter, Rabbi Yosef, the chief Sephardic rabbi of Israel, quoted the Code of Jewish Law to point out that the rabbis of Russia had a holy task and obligation to remain at their posts. “This is the time when you must strengthen and inspire your congregations,” he wrote. “We herewith encourage you and inform you of the Torah ruling that every rabbi has a sacred obligation to remain with his flock, and he is forbidden to leave his congregation, G‑d forbid.”

“Today you, the rabbis of Russia, are going through a challenging time,” wrote Sharansky, who spent nine years in Soviet imprisonment before being released and emigrating to Israel, where he most recently led the Jewish Agency for Israel. Sharansky wrote that while aliyah numbers have gone up from both Ukraine and Russia, the urgent Jewish communal work on the ground in both countries must continue. “[Just] as … important – is your work to strengthen the Jewish community, to save the connection of every Jewish family with our tradition, our people and our country in the most difficult conditions… .

“I send each and every one of the rabbis and rebbetzins of Russia my warmest wishes and heartfelt regards. I want them to know that they, like rabbis in Ukraine, are at the forefront of the struggle together with Israel for the future of our People.”

Based on an article by Chabad.org

PrevBelarus: Holocaust Memorial Monument Inaugurated in the Historical Jewish Shtetl of Shklow
JRNU Partners with RestoringVision to Bring 50,000 Pairs of Glasses to the People of UkraineNext