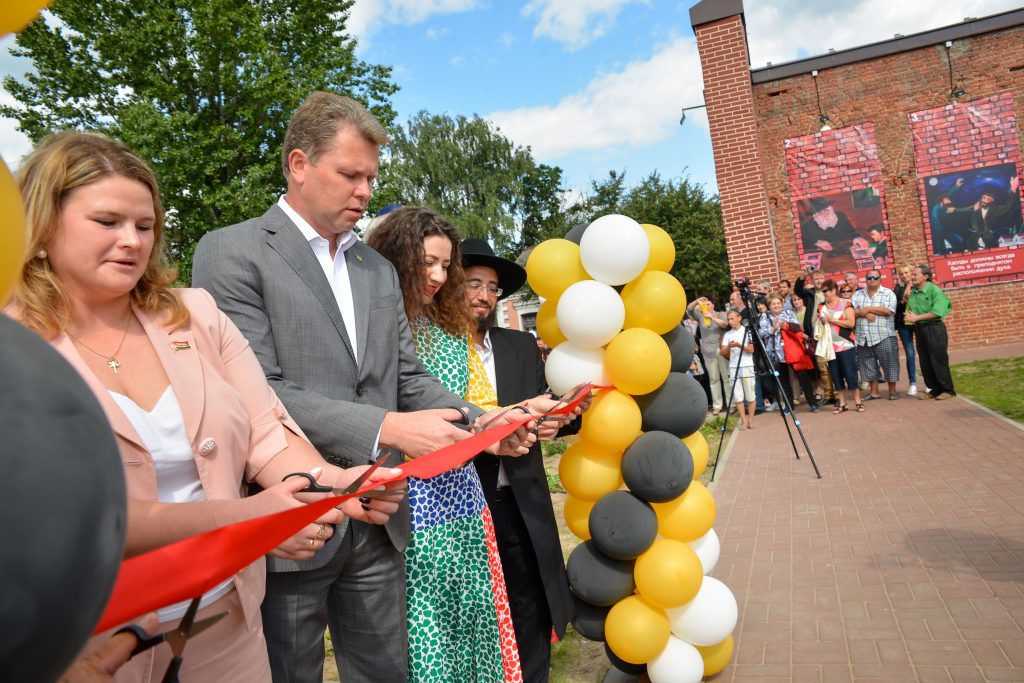 The walls that remained from the synagogue that once stood in Bobruisk, Belarus had stood forlorn, no longer able to contain the beating heart of the once bustling Jewish shtetl.

No longer did the butcher, shoemaker and tailor of Bobruisk hurry in at the crack of dawn to pray and catch up before a busy day of work. The stories buried within the walls remained hidden, as secrets, untold.

As of yesterday, August 4, the walls no longer stand as quiet witnesses of generations past, now these walls have been given the opportunity to tell the story of their history, the story that they had witnessed is now being shared with all who come to visit.

The walls have been turned into an outdoor museum, memorializing the rich Jewish history of Bobruisk. The museum is named ‘The Jewish Courtyard’.

The celebration of the grand opening was filled with people, many having to observe from behind the fence. ‘The Courtyard’ is located at the intersection of Chongarskaya and Bakharov streets.

The chairman of the Bobruisk city executive committee, Alexander Studnev, opened the ceremony followed by the poet, Leonid Rubenstein, who moved many to tears with his heartfelt words that brought a picture of the Bobruisk of yore to everyone’s minds.

Rabbi Shaul Khababo, Rabbi of Bobruisk, delivered a hopeful message that the restoration of the courtyard, which is only part of a larger project to restore other Jewish historical sites in the Belarus, is the hearkening of the rebuilding of the third temple on the temple mount in Jerusalem, where the first two temples once stood.

The ceremony concluded with Rabbi Khababo handing Alexander Studnev a precious artifact: an extract from a permit document for the former synagogue to be transferred back to the Jewish community for use by the Council for Religious Affairs under the Council of Ministers of the USSR dated August 2, 1990. Alexander Studnev accepted the artifact with a smile and promised those gathered that this is only the beginning, next they would be attending the grand opening of the ‘Jewish Quarter’ on Socialist Street.

PrevChernivtsi: Memorial monument placed on mass grave of pogrom victims
The Rambam’s 14 holy books have been translated into RussianNext