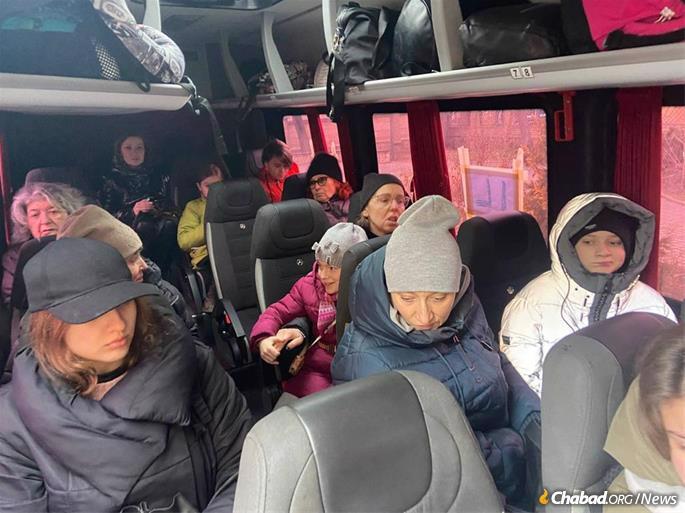 The Logistics of Transporting (and Feeding) 30,000 Jewish Refugees

Whenever Tania Baily or her 13-year-old daughter, Veronika, hear a siren, they jump with fear. After spending three days running between home and the local school, which doubled as a bomb shelter, and sleeping fitfully there each night as the air-raid sirens wailed, the two decided that it was time to leave their Ukrainian village, which is 160 kilometers from Kropyvnytskyi (Kirovograd until 2016), in central Ukraine.

“We received a message from the Jewish community in Kropyvnytskyi that they were organizing a bus to leave Ukraine,” says Baily from the Budapest hotel room she now calls home. “We have family here in Ukraine and did not want to be away from them, but we could no longer live in fear, so we joined.”

The Kropyvnytskyi community, led by Chabad-Lubavitch Rabbi Dan Zakuta, is among dozens of Ukrainian Jewish communities affiliated with the Federation of Jewish Communities (FJC) organizing transportation and support for those fleeing their burning country.

As the situation in Ukraine grinds into its 13th day of death and destruction, it has become clear that it will take decades, at least, for life in Ukraine to return to what it had been just two weeks ago.

Homes are destroyed, lives are shattered, and communities have been decimated.

According to on-the-ground reports, representatives of FJC and Chabad-Lubavitch centers in Ukraine have helped evacuate 30,000 people so far, including the children from the FJC Chabad-run childrens’ homes in Odessa, Zhitomir and Dnipro. Largely situated within the historic Pale of Jewish Settlement, the area in which the Czars forced the Jews of the Russian Empire to reside, Ukraine is home to an estimated 350,000 Jews spread throughout the country.

In the first few days, the effort was haphazard, a mix of buses and private cars scrambling towards Western Ukraine, and then to the border. The focus then was on the childrens’ homes and others who were most vulnerable.

In the days that followed and as reality sunk in, a large-scale rescue effort has taken shape—one that has continued unabated, even as the early refugees settle in Israel, Germany and elsewhere.

“Some have nothing more than a Ukrainian birth certificate. We are helping them immigrate, and eventually to learn the language, and find work,” says Devorah Levenharts, a Chabad emissary from Kiev, who crossed the border last week and is preparing to welcome 70 members of her community in Israel today. “They are our family, and we will continue to support them whatever comes our way.”

Out of Harm’s Way

At the moment, most of the refugees hail from the eastern part of the country, which has seen indiscriminate bombardment—cities such as Kharkov (which is being leveled), Sumy, Chernigev—as well as the capital city of Kiev.

Some people have been moved out of the country entirely, while others remain. Those that have chosen to stay include conscription-age males, who are forbidden to leave the country, the elderly who cannot or are afraid to travel and others who fear leaving their homes.

“Our first and primary goal is to get people to a place where they are not in immediate danger of bombing,” says a FJC organizer who asked not to be referred to by name. “Obviously the closer to the western borders, the better”

In every major Ukrainian city where flight is still feasible, FJC has on-the-ground representatives who liaise with locals wishing to leave, arrange for buses and drivers and oversee the loading process.

FJC has a permanent presence in 35 Ukrainian cities and towns—communities that are served by 200 Chabad emissary families. These centers are often the gathering point for those wishing to leave, as well as shelter for those who stay behind.

Once the refugees are out of harm’s way, organizers work to get them to the border and beyond.

In the case of Baily’s bus, the trip took 30 hours, much of it in heavy traffic, during which the driver did not sleep at all. “He was very brave,” she recalls. “Even when the air-raid sirens rang, he never stopped.”

For security reasons, the exact paths out of the country cannot be revealed, and they change frequently based on the moving front, road conditions and other factors.

In some places, the most effective mode of transport has been to shuttle them from their hometowns to a central city, where they then board trains or buses to the border cities such as Lviv. Once there, they again board buses to transport them over the border to Poland.

Another busy exit point is Odessa in the south, where an estimated 2,000 people are transported by the FJC on a daily basis towards Moldova. They include local Odessan Jews, as well as Jewish refugees from other parts of the country.

Baily’s group was taken to the city of Chop, Ukraine, on the Slovakian border. After crossing, they were greeted with hot drinks and refreshments, a quick reprieve before they continued to Budapest, Hungary, where they were put up in a giant hotel Chabad rented for refugees from all over Ukraine. Similar Chabad refugee sites are operating in Romania, from which they are moving on to countries like Austria and Germany.

As the crisis entered its second week, it became increasingly difficult to obtain buses and drivers willing to operate them.

Even when they can be sourced, the cost has skyrocketed; a single bus ride can cost as much as $20,000. When organizing hundreds of trips a day, the price is astronomical.

Currently, FJC organizers are exploring investing $500,000 in purchasing buses in Europe. In the next few days, they hope to have a more nimble network of vehicles able to transport people both within Ukraine and over the border.

The sum spent thus far on transporting and feeding the refugees is believed to be around $3 million, and it will only balloon in coming weeks. This is in addition to the sums spent on feeding people all around the country, where the current situation has paralyzed the economy and left the supply chain in ruins. At the same time, in areas such as Kherson, FJC has been supplying people with foodstuff, including fresh bread when possible.

Once over the border, the refugees are met by local Chabad emissaries as well as representatives of various aid organizations, who assist them in finding lodging and kosher food, and also arrange passage to wherever those fleeing will eventually resettle.

Chabad emissaries who have crossed the border with their flock are continuing to serve and have rented two hotels in Romania to house the remnants of their tattered communities.

This Shabbat, Chabad in Budapest hosted refugees, including the Bailys, while thousands of others were hosted in Moldova and Romania.

This is 13-year-old Veronika’s first time abroad, and she said she is excited to see the large buildings and busyness of Budapest, though her mother says she cannot feel the joy. “My heart breaks,” she says, “when I understand how hard it is for those we left behind in Ukraine.”

In the meantime, preparations are being made in Israel to welcome those who choose to reside there.

For her part, Baily prefers to believe that the crisis will be over soon, and she will be able to return to her village and the family members left behind. For now, she says, she will remain in Europe, praying and hoping for peace.