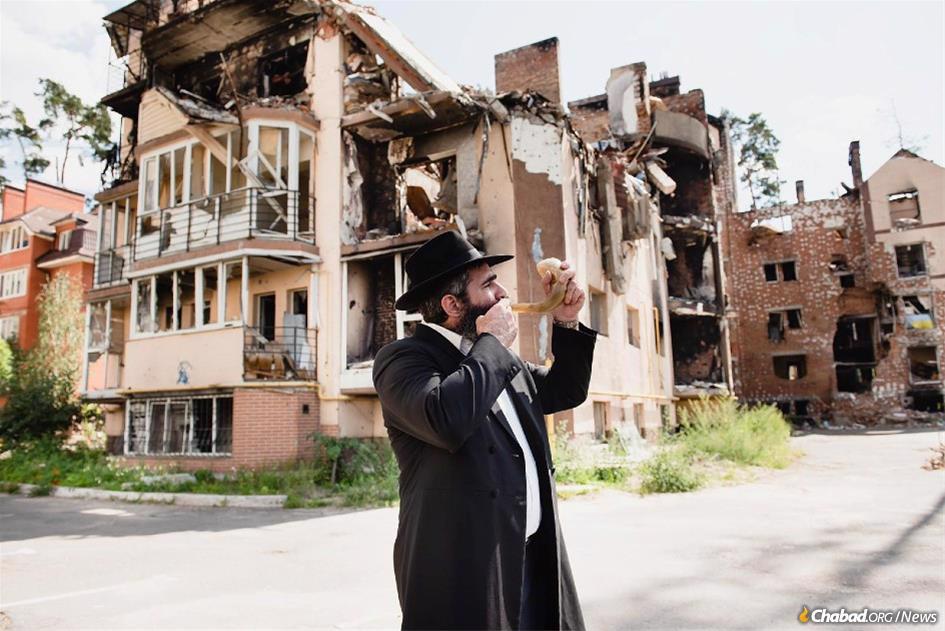 With sirens blaring almost constantly and missiles hitting the center of Zaporizhzhia, Ukraine, Rabbi Nachum Ehrentrau can hear rockets detonating just several hundred meters from his synagogue. The rabbi and his wife, Dina, have directed Chabad-Lubavitch and the Jewish community of Zaporizhzhia (also spelled Zaporozhye) for the past 27 years. Shelling notwithstanding, they’re in Zaporizhzhia with four of their children preparing for the High Holidays. “Today, there were very close hits,” Rabbi Ehrentrau tells Chabad.org. “I ask everyone to please pray for our community.”

“We are still here doing our work. This will be the only place for Jews to pray on Rosh Hashanah and hear the shofar,” the rabbi says. “We have prepared the synagogue to accommodate 700 people.”

Ehrentrau reports that since the crisis began, he’s been connecting with many Jews who he hadn’t known of previously. “The crisis has aroused people to reconnect with their Judaism,” he says. He’ll be giving out thousands of holiday packages to families before the holiday, with food, toys and locally manufactured honey cookies.

In fact, the honey cookies from Zaporizhzhia are being distributed in 30,000 holiday packages being supplied by FJC and Chabad’s umbrella relief network, the Jewish Relief Network Ukraine (JRNU). “We began preparing these packages months ago,” says Judi Garrett, COO of JRNU. “They are being distributed to cities and towns across Ukraine by our vast network of rabbis and volunteers. We hope this will bring people some joy during a difficult time.”

Even with the intense fighting, Ehrentrau managed to secure a local factory and produce 44,000 pounds of kosher-certified honey cookies. “It means so much to people to receive these packages,” he says. “They feel connected to their people, knowing that someone cares about them.”

From New York, Chabad-Lubavitch headquarters dispatched a team of 18 rabbinical students—most of them Russian- and Ukrainian speakers—to assist the rabbis on the ground in distributing aid packages and running prayer services. “We just arrived last night,” says Sholom Popper, a rabbinical student from New York fluent in Russian, who is posted in Vinnitsa, in Ukraine’s west, together with two other students.

“Hundreds of people are lining up to receive a holiday package and coupons to buy essentials in local stores,” says Popper, who describes how while they waited in line, 30 men took a moment to pray in tefillin. The rabbinical students are staying in Vinnitsa’s FJC ‘Or Avner’ Jewish day school-turned-refugee camp, which currently houses 46 families from all over Ukraine.

Chief Ranni of Zhitomir, Shlomo Wilhelm, is busy distributing 500 holiday packages and says he expects 400 men, women and children at Rosh Hashanah services. “We’ll also be visiting homes, helping those who aren’t able to attend the synagogue hear the shofar,” he notes. While people lined up earlier today to receive their holiday packages, Wilhelm says four of them put on tefillin for the first time in their lives.

On the far western side of Ukraine, in the Carpathian Mountains, Rabbi Mendel Wilhelm of Chabad of Uzhgorod is gearing up for a large crowd on Rosh Hashanah. Known as the safest area in Ukraine, many have come here indefinitely while they wait to return to their hometowns in harder-hit parts of the country. “We’re helping people with whatever they need—from accommodations to medication,” he says. “Two of the rabbinical students have been assigned to our area, and they’ll be conducting services in the nearby city of Khust.”

“May we strengthen ourselves this Rosh Hashanah,” Wilhelm says in prayer. “And may G–d finally take us out of exile, restoring peace and harmony to the world.”

Based on an article by Mendel Super | Chabad.org