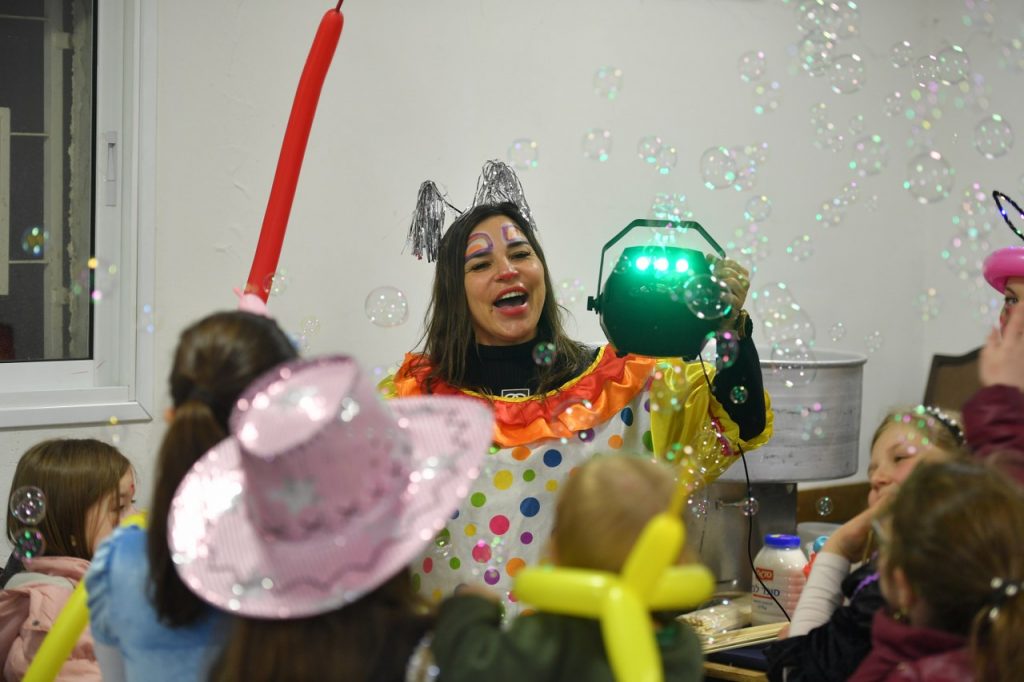 With the support of the FJC, thousands of Jewish refugees from across Ukraine celebrated the holiday far from home

Late on Tuesday, Miriam Moskovitz, FJC representative and Chabad-Lubavitch emissary to Kharkiv, Ukraine with her husband Rabbi Moshe Moskovitz, received a text from a woman in her community and a photo of fresh-baked hamantaschen.

Given that it was a day before Purim, that wasn’t particularly remarkable. What was remarkable, though, was the woman baking them had done so from her kitchen in Kharkiv, the second-largest city in Ukraine.

“Hi Miriam,” the woman wrote. “From Kharkiv with hope, sending you my hamataschen that I made last night not like we usually do with other music in the background, but … waiting for a miracle.”

The photo came a few hours after the Jewish community of Kharkiv gathered together on Zoom along with the Moskovitzes, who have led the community there since 1990, to discuss how to celebrate Purim under these difficult conditions.

“It was very emotional Zoom,” said Moskovitz. “Many are in places where they cannot hear the Megillah. Many are alone very far away from their homes, or they are stuck in Kharkiv and unable to leave. Our message to everybody is that we are with our community, that we are still united even though we are physically spread out and in different places.

The Moskovitzes, who are prepared to go back to Kharkiv as soon as it is safe, are also planning a Purim event on Thursday for the 200 members of their community who are with them in Israel.

Hundreds of people in Kfar Chabad, a town in central Israel, rang in Purim on Wednesday night with singing and dancing, in a special event organized by the Federation of Jewish Communities of the FSU (FJC). Joining them were guests from FJC and Chabad communities in Ukraine who had fled to Israel in recent days, including Jews from Cherkasy and their community’s leaders, Chani and Rabbi Dov Axelrod.

“The event was amazing,” said Chani Axelrod. “It was powerful, and it gave everyone strength to go on. Physically, we are happy and celebrating Purim with the people of our community who came with us to Israel, and we felt that happiness. But our hearts are with the people who stayed in Cherkasy, Ukraine. We feel for them and pray that they will be safe.”

Adding to the joyous feeling was the knowledge that the Jews still in Cherkasy will be celebrating Purim together.

“Around 50 to 60 people will come to shul tomorrow,” said Axelrod. “It came from them. We thought they would be scared to go out of the house, but they called us and together with them we organized a seudah (meal). I was amazed. They have shelling and are sheltering at night.

“We have two men there who are helping to arrange it. They sent us photos today of the volunteers who came in to help cook the meal and pack the packages for mishloach manot. They will also get additional food to take home for Shabbat. Thank G‑d, it is feeling like Purim. We are unbreakable. We will bring Moshiach, and we will do it with a lot of energy and happiness.”

Also supported by the FJC, Purim celebrations are also being held elsewhere in Israel and Europe, and in all places, the feelings of joy were mixed with sadness at the thought of those left behind, those who remain trapped amid bombings and devastation.

Over the last few weeks, more than 120 orphans from  FJC’s ‘Mishpacha’ Orphanage in Odessa were evacuated to Berlin under the care of the local Chabad-Lubavitch emissaries. In addition, another hundred children and women from Ukraine are also staying there for now.

Chabad has made sure to include them in all of their recent activities. On Wednesday night, they joined with members of the Jewish community at Chabad Berlin to celebrate Purim in the courtyard of the synagogue with a reading of Megillat Esther.

For many children, getting dressed in costume is a big part of the Purim celebrations, and Chabad in Berlin ensured that the young refugees were properly attired. Rows of costumes from princess dresses to spacesuits were laid out on tables; the refugees were able to go and pick out the outfit that suited them best, bringing smiles to all.

Additionally, a Purim party is planned at a local hotel for Thursday. The event is being moved from Chabad’s Jewish Educational Center so there will be enough space to include the orphan children from Odessa.

At Chabad-Lubavitch in the Republic of Moldova, dozens of Jews from Ukraine celebrated Purim by hearing a reading of Megillat Esther. They sat at tables adorned with balloons and wore brightly colored plastic hats that were given out to add to the festivities. Additionally, mishloach manot packages were prepared in advance of the holiday, which will be distributed to local Jews and refugees who are temporarily staying in the country.

Based on an article by Faygie Levy Holt | Chabad.org