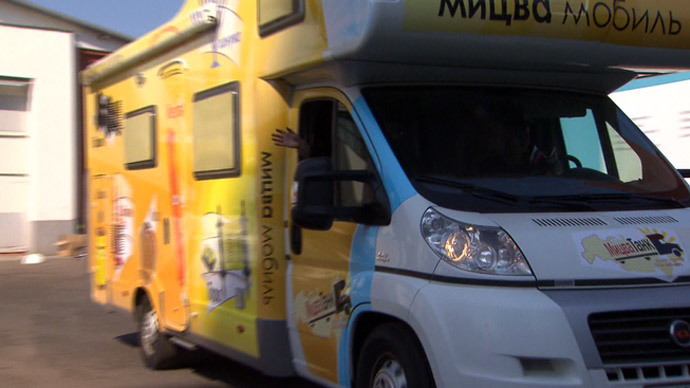 ‘Mitzvah tanks’ set off across Russia

Rabbis and students of Jewish religious schools from the US, Europe, and Israel have set off on a journey across Russia in special vehicles known as “Mitzvah tanks.”

For the first time in history, Crimea was in included on the itinerary.

A Mitzvah tank is a portable mini-synagogue used by Orthodox Jews as an outreach campaign in countries all over the world. US, European, and Israeli Jews have come together to Moscow to travel through the country and spread the word of Judaism.

They were divided into four groups, each one traveling into different directions – the south, the Urals, Siberia, and central Russia. The Mitzvah tanks are scheduled to return to Moscow on August 24.

Organizers say the purpose of the trip is to awaken interest in Jewish roots and culture.

In most cases, people are interested in the basics of the Jewish Faith, they try to understand what they believe the Jews, what kind of religion, and what is its canon,” the head of the press service of the Federation of Jewish Communities in Russia, Andrey Glotser, told Itar-Tass.

Those aboard the Mitzvah tanks are prepared to answer questions, give lectures, and discuss Jewish literature.

Glotser praised the activism, adding that it has been very successful over the past two years.

Such vehicles could be seen traveling all across the globe. Mitzvah tanks were first used on the streets of New York City in 1974. They were created to remind Jewish immigrants to the US not to forget about their own religion and culture.

The Mitzvah tanks are usually painted as a stone synagogue and are covered with Jewish banners and logos. Many have external loudspeakers to play klezmer-style music.