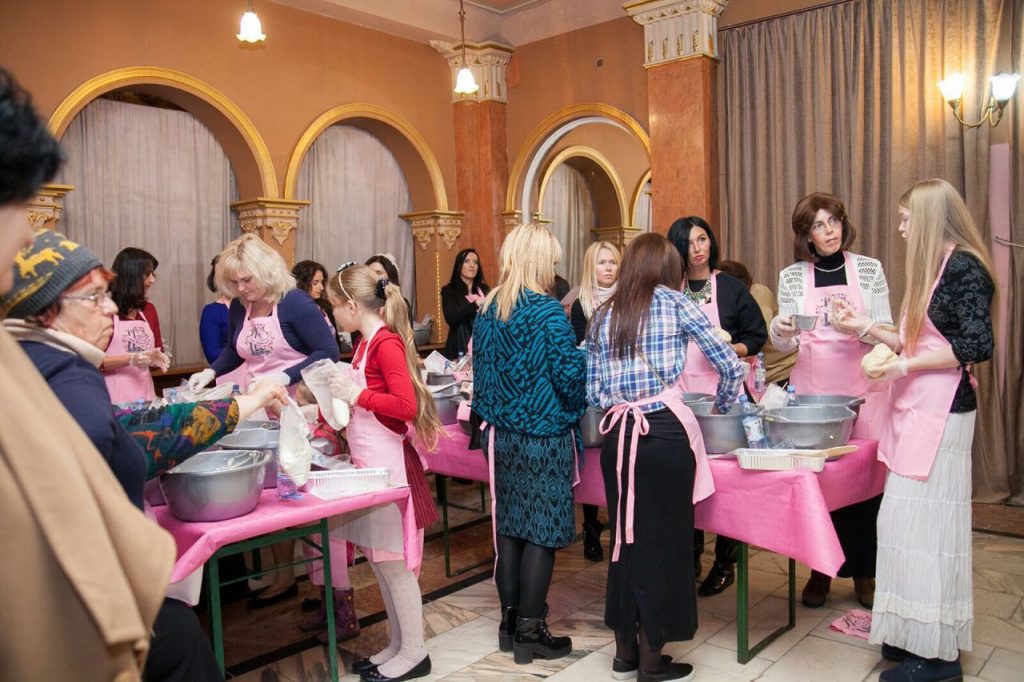 Over a hundred Ukrainian Jewish women came together for a festive challah baking workshop in Uzhgorod, Ukraine last Thursday. The workshop was organized in honor of the Bat-Mitzvah of the city rabbi’s oldest daughter, as the family wanted to use the opportunity to “touch” as many local women as possible by bringing them an evening of joy and learning.

“We wanted to start the new year off on the right foot, to bring about a festive Jewish atmosphere, especially for women and girls,” says Rabbi Mendel Wilhelm, the birthday-girl father and chief rabbi of the city.

The community leased the beautiful ancient Uzhgorod synagogue, which now serves as the city Philharmonic hall, to organize the evening of Jewish learning, food, music and dancing.

The workshop was led by guest “chefs” and lecturers – rabbanit Esther Villaner from Zhitomir and rabbanit Penina Glitzenshtein from Chernovtsy, who shared they knowledge in a lively and energetic manner.

“The participants left with a lot of Jewish knowledge, and, hopefully, a lot of zest to continue to participate and learn more,” rabbi Wilhelm said.

Uzhgorod was an important hub of Jewish activity before World War I.The city’s antique synagogue was built in 1904 and is considered a monument of the period’s architecture. Since World War II, it has been used as Uzhgorod’s concert hall, although a few years ago a plaque was installed on the facade, noting the 85,000 Jews in Western Ukraine and Hungary, who perished in the Holocaust. The city’s Jewish community is now growing and hosts weekly classes, shabbat hospitality, prayer services and a kindergarten among other programs.