Shabbat-morning prayers were about to start at the synagogue in Mariupol, Ukraine, when the rocket barrage came.

“The whole synagogue was shaking; we knew right away this was very serious,” says Rabbi Mendel Cohen, the seaside city’s rabbi and Chabad and FJC’s emissary.

Moments after it ended, the synagogue’s security guard, Vlad, came running in with the news: Mariupol had been hit by a massive and sustained rocket attack in the Vastochni neighborhood of the city. When the dust had settled, the attack left 30 civilians dead and more than 100 wounded, marking Mariupol’s bloodiest day since last May and a significant escalation in the war in eastern Ukraine.

Fired from multiple-rocket launchers, the Grad rockets landed on a large neighborhood that includes a bazaar and marketplace, schools, apartment blocks and a bus station, located only some three kilometers away from the synagogue.

The Organization for Security and Cooperation in Europe (OSCE) has since said the rockets came from pro-Russian separatist positions east of Mariupol.

“Many people in synagogue on Shabbat were from that neighborhood,” states Cohen. “You can imagine what it sounded like here; there were screams, we had to calm people down.”

While there have been reports that a Jewish woman was among the victims of the attack, Cohen says they are still trying to ascertain whether or not that’s true. “There is a woman with a Jewish-sounding name on the list of victims, but she is not in our database or in that of Chesed [the social-services organization of the American Jewish Joint Distribution Committee]. We are still trying to find out who she was.” 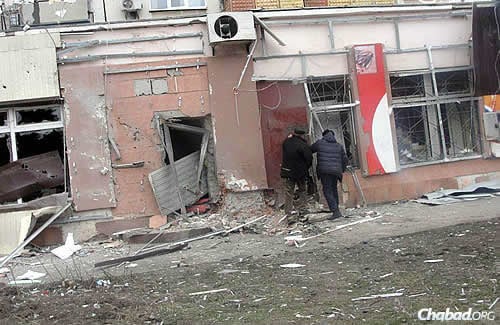 Grad rockets landed on a large neighborhood that includes a bazaar and marketplace, schools, apartment blocks and a bus station, and shook the synagogue not far away. (Photo: City of Mariupol Web Site)

The city has been on the brink of war since a combination of Russian forces and pro-Russian separatists invaded across the Russian border in September, advancing down the road along the Azov Sea before halting on the outskirts of Mariupol. That attack took Ukraine by surprise; in the months since, Ukrainian troops have used the relative quiet to fortify the city—now on the frontlines—ahead of what many feel is an inevitable Russian offensive. Tired of being shuttled around the country, citizens wait with bated breath for the moment the onslaught finally comes. Many thought Saturday’s attack was it, but the subsequent days of calm have worked to push away thoughts of imminent invasion, if only on the surface.

Cohen—whose family is currently in Israel, and who travels frequently between the two countries—has been assisted in day-to-day operations in Mariupol by Rabbi Aaron Kaganovsky. Both leaders say that although leaving the city was the topic of discussion on Saturday, come Sunday morning, such talk already began to recede into the background. 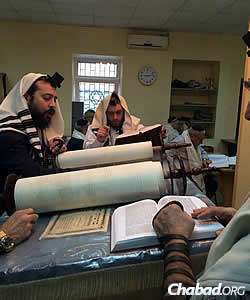 Rabbi Mendel Cohen, the city’s rabbi, reads Torah in Mariupol’s synagogue. Rabbi Aaron Kaganovsky, who has taken over some of the shul’s daily operations, is to his right.

“Right away, there were a lot of people who wanted to leave, and we began making plans to help them do that,” says Kaganovsky by phone from Mariupol. “If you saw pictures of the attack, you would understand; it was awful, and people were scared.”

Through funds allocated by the International Fellowship of Christians and Jews, one bus of Jewish community members left Mariupol on Monday night, arriving early on Tuesday in Zhitomer in western Ukraine. But because of the lull, most have chosen to hold off for now.

“They don’t want to go until they feel they have no choice,” says Kaganovsky. “They say, ‘Look, we’re going to leave, it’s going to be quiet, and then when we return, it’ll start up again.’ People are so tired of picking up and going; if they leave, it’s to leave for good.”

Cohen agrees, saying that in the immediate aftermath of Saturday’s attack, most of those who left have gone to Dnepropetrovsk with an eye towards immigrating to Israel. “Many people here don’t want to get on a bus and go for 13 hours just to make a return trip of 13 hours. They’ve done it two or three times already,” he explains. “Now it’s cold, and that’s difficult. But people are taking this very seriously. I think more people are drawing up permanent moving plans, but they’re saying they won’t leave until it is really bad.” 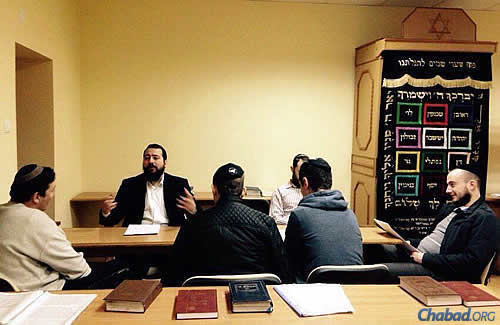 Cohen, who travels back and forth from Ukraine to Israel, where his family resides right now, teaches a class to Jewish residents dealing with volatile living conditions.

Kaganovsky leads youth classes and regular prayers. While there, Cohen was able to give two adult-education classes on the Rohr Jewish Learning Institute’s Curious Tales of the Talmud. “The first class was before the attack, and the second was on Sunday, right after it. We had half of the crowd on Sunday, but it still continued.”

Ultimately, nobody in Mariupol knows what will happen next.

“We hope such an attack doesn’t happen again, and this was just a one-time flare-up,” says Cohen. “But the situation is extremely serious, and there’s no guarantee that’s the case.” 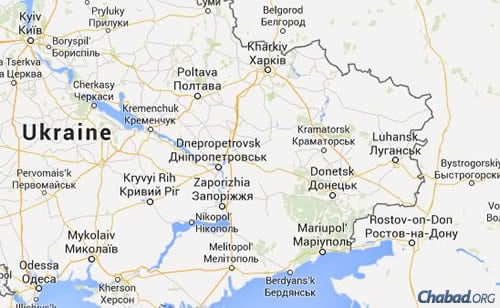 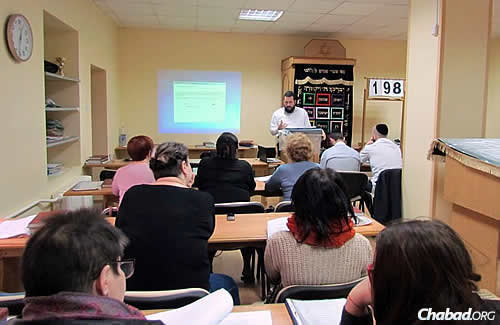 On Sunday, the day after the attack, Cohen taught a course to a smaller group than usual. 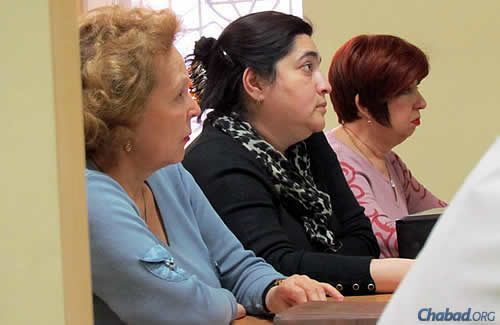 Learning helps distract residents from the recent spate of violence, at least temporarily. 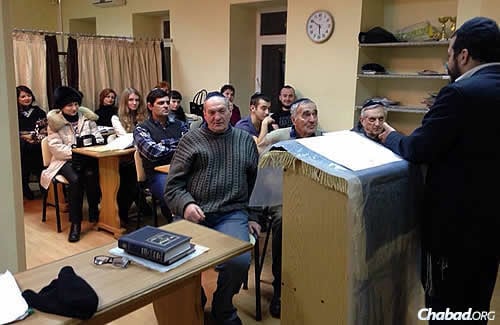 Class in Mariupol, a city on the frontlines, where many Jews have either left or are considering a move before the situation worsens.

Prev‘World of Jewish Woman’ Magazine comes back
Putin: “They were murdered only because they were Jews”Next

University Students Discover the Jewish Perspective to Charity and Kindness