As one of the only rabbis serving the Deaf community, Rabbi Yehoshua Soudakoff is constantly on the go.

Right now, he’s in Khanty Mansiysk, Russia, bringing Shabbat, matzah and Jewish awareness to contestants and guests at the 18th Winter Deaflympics, which runs from March 28 to April 5.

Since the first Deaflympics—then called the “International Games for the Deaf”—were held in Paris in 1924, the sports competition has grown to include many nationalities, including Israel, which normally sends a team to the summer event. Yet Soudakoff—who is Deaf—says this is the first time that Jewish programming has been organized for the athletes and participants of the games.

“I’m proud to be here to represent the Jewish Deaf community,” says the Los Angeles native, who has led many programs for Russian Deaf Jews in the past few years with the support of the Russian Jewish community under the leadership of Rabbi Berel Lazar, the chief rabbi of Russia.

Hosting a Shabbat dinner last Friday for a dozen guests required quite a bit of organization. Rabbi Yerachmiel Gorelik—co-director of Chabad-Lubavitch of Tyumen, Russia, some 630 kilometers to the southwest—provided the kosher food, which was shipped from his community to Khanty Mansiysk. He also helped coordinate the details of the Shabbat meal with the hotel venue. All told, eight boxes of food were shipped from Tyumen, and in preparation for Passover, two more from Moscow contained matzah and wine.

“When I was growing up, I never understood what it meant to celebrate Shabbat because I never had a Deaf rabbi around to explain it to me,” says Minnesota native David Nathanson of the U.S. curling team, who took part in the Shabbat meal.

Although he will be returning to California this week to celebrate Passover with his family, Soudakoff says he’s been very busy distributing handmade shmurah matzah to the Jewish athletes, journalists and guests—some of whom did not even know they were Jewish.

“I met a guy on the USA hockey team,” the rabbi reports. “I asked him if he was Jewish. He said, ‘No, my parents are Christian.’ Then, as an afterthought, he added, ‘My mother used to be Jewish, but she goes to church now.’ ”

The sentiment of many of the athletes can perhaps be best expressed in the words of Russian Deaf historian Victor Palenny, 51, who among his many achievements is also chief editor of the All Russian Federation of the Deaf monthly magazine VES. At the dinner, he told the rabbi: “Thank you for making me feel Jewish.” 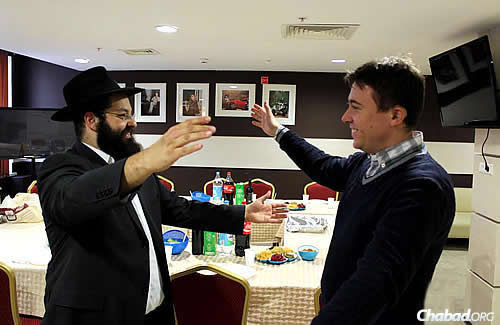 The rabbi greets Misha Shushpannikov before the start of Shabbat. (Photo: Anna Volkova) 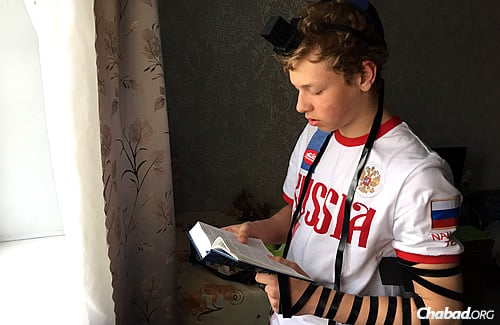 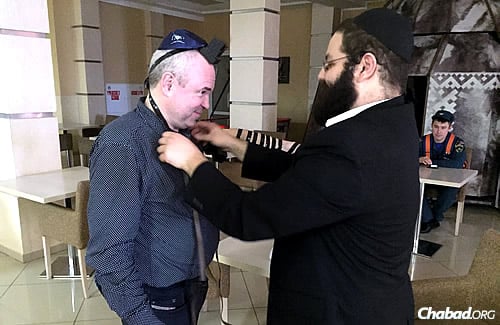 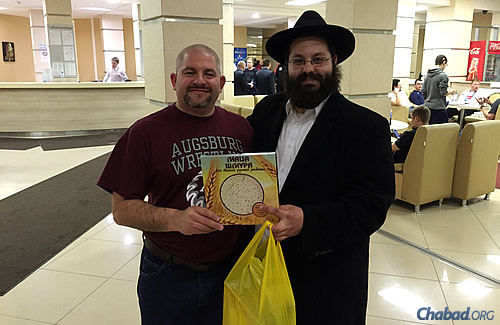 Minnesota native David Nathanson, who’s on the U.S. curling team, gets some shmurah matzah for Passover. 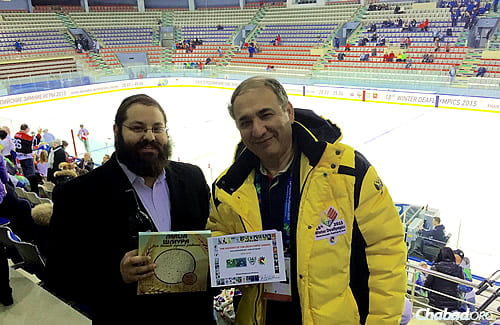 Rafael Pinchasov breaks for matzah at a hockey game, while he displays a book on the history of the Deaflympics. 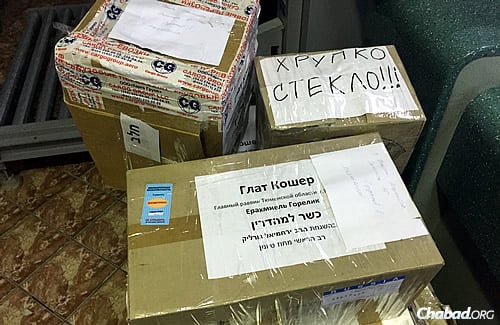 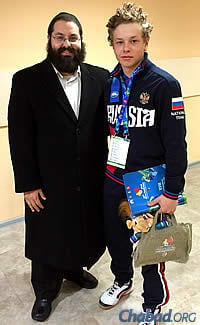 Soudakoff with Alik Yakovlev, a former camper of his representing Russia on the alpine skiing team
PrevBatumi synagogue back to Jewish community after 86 years
Lugansk Jewish Community: School Building Not Confiscated During PassoverNext

FJC Surprises Ukraine Refugees in Israel with ‘Your Jewish Kit’

Ukraine: The Personal Stories of Those Left Behind